The one tip you need to use the Pentax 67 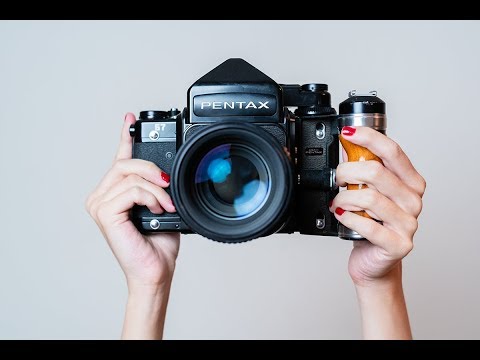 With Rich Cook and Tyler Shields

Check out this amazing piece by DigitalRev and Rick Boost

As one of the most recognizable photographers in L.A, Tyler Shields knows what descriptors are thrown his way by the critics. Works that slam together glitz and grime together, like bubblegum sparkle mashed with dirt, have seen him proclaimed as tawdry, a shock tactician, and a firebrand. One particular moniker he has chosen to embrace as the title of his new photo collection book is ‘Provocateur’.
“History is always more interesting then present day because you can look back on it from all angles,” Shields says. “In the present we form opinions and those become bias but when you look back you see it for what it was and then from there create a series in a totally different way.”
Shields’ likes to play in whatever era grabs him; and what grabs Shields is the empathically iconic. Whether that be the intoxicating hedonism of aristocratic 18th century France or the societal stresses of modern America. Shields says “I like to create my own history and the freedom in that is priceless.”
DIGITALREV

In Tyler Shields’ photographs the traditional victim of violent race-related injustice turns aggressor. For Shields, it’s a powerful and symbolic role reversal.
There he hangs, just feet above the water.

The white, hooded figure whose body is limp and lifeless resembles a uniformed member of the Klu Klux Klan. As he hangs, a black man securely holds the opposite end of the rope. Is he the culprit or the savior? We do not know.

It’s an image shocking even by today’s standards: after all, the despicably archaic act of lynching still permeates today’s society. Just this week a black man in Georgia was found hanging behind a house that wasn’t his.

He had recently been questioned for the death of a white woman and, as investigators search for answers, the family refuses to accept his death as a suicide.

“Right now we are going through a real racial issue in our country,” Tyler Shields, who photographed the image for his new series Historical Fiction, told The Daily Beast. “And, to me, these things that happened in the 20s and 30s, they’re just as poignant today as they were back then.”

According to an investigation by the Equal Justice Initiative (PDF), some 3,959 blacks were lynched between 1877 and 1950 throughout the South.

The KKK and other “white mob” groups have been primary suspects in countless cases that are still being investigated today.

Yet there’s never been a documented case of anyone hanging a Klansman, according to Shields, who was curious as to how the role reversal would look and the emotional reaction it would evoke in the viewer.

TO READ THE REST OF THIS ARTICLE by Justin Jones

ARTICLE BY Zak Cheney-Rice
The most polarizing photo of Tyler Shields’ career shows a naked black man hanging a Klansman.The Ku Klux Klan is not happy about it, Shields says. Nor are a number of his artist friends, who claim the image is so loaded with painful iconography that they worry how viewers will react to it.

“It was too much for them,” Shields told Mic in an interview. “I have a photographer friend who looked at the image and freaked out: ‘You can’t put this out there. It’s too crazy. It’s too much.’

“[They] kept telling me, ‘People are going to ask you too many questions,'” he said. “‘I wouldn’t even know what to say.'”

None of this fazes Shields, however; in fact, it’s kind of the point. For him, the “challenge” of disseminating images like this lies precisely in not having a prepped explanation for what they signify.

“A lot of artists want an exact statement for everything they do,” he said. “But I never want to not create something because I’m afraid of what it might say.”

Even so, you might assume that the 33-year-old photographer from Jacksonville, Florida — who built his newest photo series around the civil rights era’s most potent images and symbols — is at least somewhat politically driven.

You might also assume that he has much to say about the state of American race relations, especially since the high-profile police killings of black men and boys like Walter Scott and Michael Brown.

But you’d be wrong — to a point. For starters, Shields is clear about how little he follows current events.

“I live in my own world,” he said. “I try to get my news the old-fashioned way, through word of mouth. So when it finally gets to me, it’s usually already a big story.”

And he’s relatively adamant about his lack of political involvement.

“I think this is the first time I’ve commented on anything politically,” he said. “I try not to be influenced by things.”
TO READ THE REST OF THIS ARTICLE BY Zak Cheney-Rice CLICK HERE
also to read the

Yesterday when I posted this, I had no idea the reaction it would get and after becoming my most shared and liked photo on both Instagram and Facebook, it was interesting to think that this photo never would have happened had I not started a 100 day photo challenge. Photography or anything you do for that matter is about dedication and I have never lost sight of that it only gets more and intense for me I only want to do better and better, and I just want to be better. So if you are reading this and you second guess anything keep pushing keep going and never stop!

Throw back to the Chromatic series such an incredible series to make.

A lot of people just care about likes they think about making or posting work that will only get likes, of course you want people to enjoy your work but likes wont make you happy they wont help you create the work for you want to create. Create what you want to create don’t makes things to please others or to get likes!